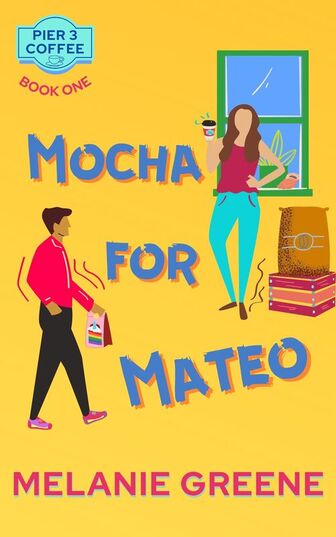 
A half-mile up the beach road, Mateo pulled over to stare at the misty surf and calm the hell down. Hair-trigger temper but never a grudge, that was his reputation. Well-enough earned, he’d admit, but not the whole story.
Seemed like no one ever wanted to get at the whole story.
The tide was on the way in, and he made out a couple clumps of surfers, zipping into wet suits and idly chatting on the sand. They’d start their mornings on the waves, and like as not end up at Pier Three Coffee afterward, boards propped in the racks, gathered around picnic tables on the deck with coffee and his protein-rich baked goods, watching their fellows and fueling up for the day ahead.
And more power to them. He grabbed his tablet and updated the delivery to Pier Three, double-checked his next stops. A few more deliveries, and it would be his lunch break. He could, as he sometimes did, swing back by Pier Three and let Alicia fix him a drink while he ate. But she would be stressing about the landlady, or snarking about his busy day, or subjecting him to her cordiality.
It wasn’t secret, their … relationship? Arrangement? He knew she was likely to classify it differently to him. Or she would be, if she ever did anything but evade both his hints and his direct questions, and be definitive. For months he’d taken her lead, and as a result everyone knew they hooked up, but no one treated them like a couple. He could walk right up to her in the middle of Pier Three or out someplace with friends, and get a nod of hello. But never a hug, never a kiss. No one in the world could spy them in passing and guess they were more than friends. They’d have zero clue how he felt about her. And since she wasn’t interested in hearing it from him, that left Mateo as his own secret-keeper.
Allowing himself another few seconds of Pacific breeze, he filled his lungs with enough ocean brine to temporarily stave off the omnipresent yeast-and-spice scents of the van.
Of his life.
He shifted into gear and went about his business. His family’s business. Alicia sometimes talked like that gave them common ground, the family business thing. She never saw the differences. That she and her brothers were grown and through university before choosing to dovetail their career paths in order to work together. That they’d united with shared goals, and picked something that catered to their interests, combined their strengths, and allowed them to work towards a vision they built together. That they’d asked each other if the coffee shop was what they wanted.
He didn’t begrudge them their unity. It wasn’t part of his reputation, after all, to hold grudges. And Mateo, with really just the one exception, lived up to expectations. So Alicia had a tight-knit bond with her brothers; so they worked well towards mutually agreed upon goals. So they listened to each other.
Living without all that sucked a bit. But the tradeoff was, in being all that was expected of him as the ‘Family’ part of ‘James Family Bakers,’ he gave the extended family no room to react against the truth of the rest of him.
​